The agriculture and rural development sector remains one of the priority sectors for Italian Cooperation in Egypt, with a sectorial portfolio of more than 60 million EURO, aiming to support the fulfillment of the strategic objectives described by the Egyptian Ministry of Agriculture in the exhaustive Report titled “Sustainable Agricultural Development Strategy (SADS) towards 2030”.

In line with the objectives of this strategy, including:

Italy continues to work with various local and international actors and institutions such as the Ministry of Agriculture and Reclamation, the Desert Research Center, the Agricultural Research Center, the Mediterranean Agronomic Institute of Bari (IAMB) and various Italian NGOs and United Nations agencies in order to achieve these goals.

Following the acknowledged experience in this area of ​​intervention, Italy was appointed by the European Union as coordinating Member State for Agriculture and Rural Development in Egypt. In addition, Italy was entrusted with a new EU-funded initiative, under the EU delegated cooperation, called “EU Joint Rural Development Program” with a total value of 27 million Euros (EU funds).

The “EU Joint Rural Development Program”, scheduled for five years, is being implemented in 3 of the poorest Governments in the country (Minya, Fayoum and Matrouh), aiming to increase agricultural production through more effective and sustainable management of water resources and through the adoption of improved farming practices, also promoting income generating activities (agricultural / non-agricultural) and the promotion of the territory.

The Agriculture and Rural Development program of the Italian Cooperation in Egypt envisages a parallel co-financing by the Italian side of about 11 million Euros, of which 10 million in aid credits to support agricultural mechanization in the Governments of Minya and Fayoum and 1 million donations for a partner development program -the economy of the North West Coast. Another project which is worth mentioning is the “Green Trade Initiative” , funded with a budget of around 7 million Euro under the second phase of the Italian – Egyptian Debt Conversion Program. This initiative aims to strengthen the competitiveness of Egyptian fruit and vegetables products to European countries through the collaboration of the Italian public and private sector. Among some of the initiatives being implemented, it is important to remember the National Marine Aquaculture Development Program in Egypt (MADE I and II) worth about 5 million Euros carried out by the Egyptian governmental body responsible for the development of the fisheries sector, “Developing the handcrafts skills and enhancing the economic status of women in Upper Egypt ” – WEE project – worth 2.3 million Euro, which aims to support Egyptian women through the improvement of income generating activities, such as local crafts, then, last but not least, the” Improving food and nutrition security in Egypt by targeting women and Youth “of € 2.4 million managed by FAO which aims to promote the fight against malnutrition and food security through the promotion of income-generating activities such as the creation of small livestock farms. 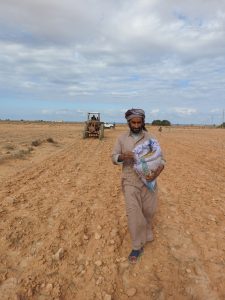