The Debt Swap Program is one of the most important instruments of cooperation between Italy and Egypt, not only for the amount of resources mobilized, but also for the strong local ownership in development processes.
The Program was established in 2001, when the first debt swap agreement was signed between the Government of the Republic of Italy and the Government of the Arab Republic of Egypt, amounting to USD 149 million of debt generated from aid credits, converted into resources to finance fifty-three initiatives, operating in sectors such as environmental protection, cultural heritage, rural development, small and medium enterprise development, education, social protection, etc.
In light of the success of the first phase, a second intergovernmental agreement, signed in 2007, provided for the conversion of an additional debt installment of USD 100 million. These resources enabled the implementation of thirty-one projects that, in continuity with the initiatives implemented under the first agreement, worked on issues such as human resource development, technology transfer, primary production development, environmental protection and social development.
The current phase of the Program, on the other hand, is based on the third debt swap agreement, signed on May 10, 2012, with an expected term of 11 years and a total value of USD 100 million (specifically corresponding to USD 82,755,369 plus EUR 13,087,911).
During 2021, the conversion process was officially concluded: the entirety of the debt installments included in the Arrangement was then paid into the Counterpart Fund (CPF) at the Central Bank of Egypt, generating a total counter value in local currency of LE 926,017,366.
These funds, according to the Agreement, are intended to finance initiatives acting in four priority sectors: 1) Nutrition and Food Security, 2) Education and Vocational Training, 3) Primary Sector Development, and 4) Environment and Cultural Heritage. In addition to these areas of intervention, 2 percent of the funds, on the other hand, are earmarked to cover the Program's operational costs and Technical Assistance activities, which, by decision of the Program Management Committee, are managed through a dedicated Technical Support Unit. 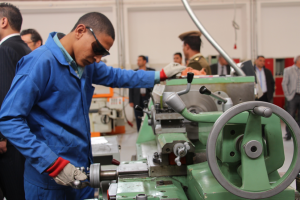